It was a busy summer for the XnO crew, with shows in Hutchinson KS, Oklahoma City OK, Dallas TX, San Antonio TX, and Houston TX.  The highlight of the summer was OKC.  Buddy finished his Champion title in style with a 4 point major and a 5 point major.  Harper completed her Bronze Grand Champion title with 3 Best of Opposite Sex and 1 Select for 19 GCH points.  Luna took Select for her first GCH major and 4 GCH points.  The Dallas show resulted in more GCH points for Harper and Buddy getting his first GCH point.  Luna took Select 3 out 4 days in San Antonio for 5 GCH points as well as an Owner Handled Group 2 and an Owner Handled Group 4.  Buddy competed in Houston and was Best of Opposite Sex in the Samoyed Club of Houston Puppy Sweepstakes. This summer also saw Buddy complete his Novice Trick Dog title in June. 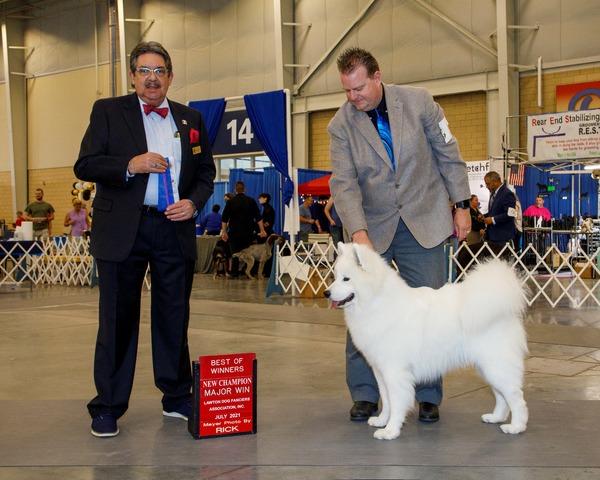